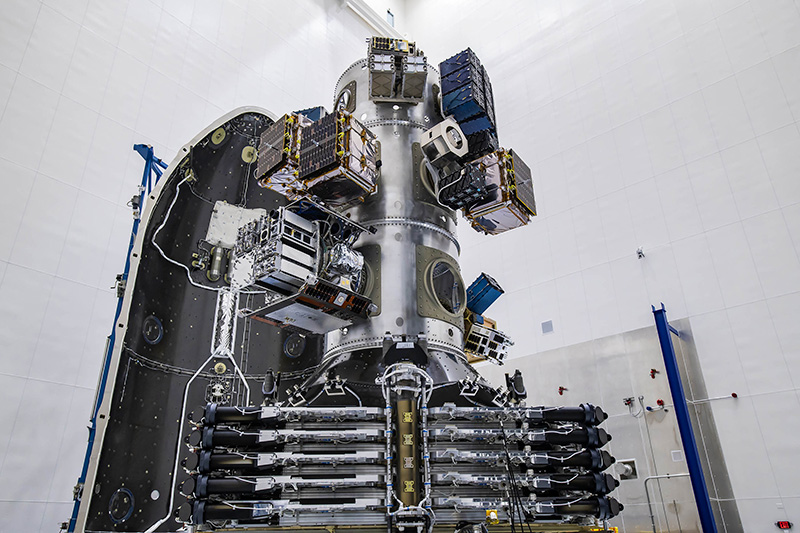 Stéphane Germain had the idea to found GHGSat in 2010 while reading a news article about the Government of Quebec’s announcement with the United States on a carbon cap-and-trade system. Seeing the economic potential of such a project, the entrepreneur gave himself six months to assess its commercial, technical, and financial feasibility. In 2016, GHGSat launched its first satellite to measure greenhouse gas (GHG) emissions from a distance. This technology, the first of its kind in the world, has made it possible for the business to position itself as a global leader in the field.

The advantage of the GHGSat satellite

The scientific community has been using satellites to measure GHGs in the atmosphere for some twenty years now. The technology used by the business makes it possible to target individual sites with great precision and to quantify these measurements. These more precise measurements make it possible to calculate how many emissions a particular site is contributing to the inventory (or to total emissions) in a region.

This advantage makes it possible to detect the presence of fugitive emissions such as involuntary methane leaks due to defective compressor stations or loose valves.

“Thanks to its microsatellites, GHGSat is the only governmental or commercial entity in the world capable of detecting methane emissions from sources one hundred times smaller than those detected by scientific satellites, in addition to providing spatial resolution one hundred times greater than that of other systems.”

Why concentrate on methane?

The first satellite launched by the business was equipped with captors to measure carbon dioxide (CO2) and methane (CH4) around the world with great precision. However, Stéphane Germain quickly realized that the demand to measure methane was greater and that their satellites would be even more precise if they focused only on this gas.

Methane is a colourless, odourless gas emitted by the agricultural industry and its waste materials, as well as through the production and use of combustible fossil fuels and through biomass and biofuels. Its global warming potential is 84 times greater than that of CO2 over a 20-year period. According to the UN, it is practically impossible to meet the Paris Agreement targets without reducing methane production, which accounts for 30% of sources contributing to global warming. For this reason, the two satellites launched in 2020 and 2021 are even more precise, measuring only methane.

GHGSat has an international client base. The business works with oil industry giants such as Chevron, Shell, Total, Exxon, and Suncor. These businesses use the data gathered by the satellites to measure their emissions and to find means to reduce them.

Governmental organizations from Argentina, Canada, the United States, Australia, and Europe also collaborate with the business. Several university centres in Canada (UQAM, PolyMTL, Waterloo, Carleton, and Toronto), along with Stanford and Harvard universities in the United States and the Netherlands Institute for Space Research, work in partnership with GHGSat.

GHGSat has also committed to sharing 5% of the data its satellites gather with the scientific community. In fact, in October 2020 the business launched PULSE, an interactive tool that makes it possible to use its data to reveal global concentrations of methane with the highest resolution.

Despite the COVID-19 pandemic, GHGSat has experienced meteoric growth over the last two years. Its staff has doubled, two satellites were launched, and the business was able to obtain $60 million in funding, in addition to a $20-million contribution from Sustainable Development Technology Canada, announced during COP26 in Glasgow..

The Global Methane Pledge is very promising: Over 100 countries have committed to limiting methane production by 30% by 2030. GHGSat sees this initiative as an opportunity for growth.

Each satellite is currently circling the Earth 15 times a day and can target any site in less than two weeks. GHGSat is planning to launch ten new methane-detecting satellites and a CO2-detecting satellite by the end of 2023. Meetings held during COP26 were fruitful, and GHGSat plans to announce new partnerships soon.

Without a doubt, GHGSat is positioning itself at an advantage to be and to remain the world’s leader in high-resolution remote sensing of GHG emissions.


During the pandemic, GHGSat launched podcasts to demystify environmental concepts and explain the latest discoveries made by the business. The episode dated April 27, 2021 explains a project done in partnership with UQAM, where the high level of methane released by hydroelectricity production was measured for the first time.