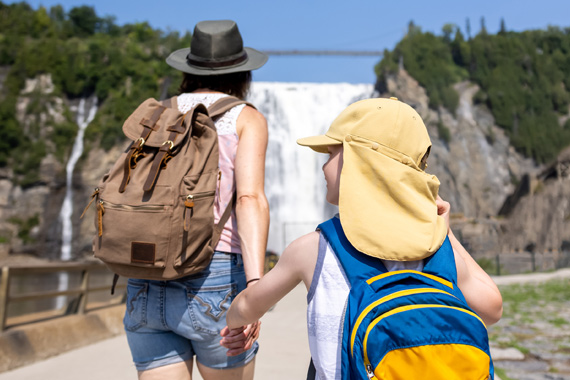 The closing of international borders due to COVID-19: who are the winners and losers? How has Canada fared? Let’s take a closer look.

So, did the closure of international borders limit or even reverse this trend? Did it result in a net gain for the Canadian economy?

Based on the figures, the answer to both questions is yes.

The balance (exports vs. imports) for personal travel spending Note de bas de page 1 increased by $8.8 billion in 2020 compared to 2019 and went from a deficit to a surplus. In short, during the pandemic, less money came in, but even less went out!

Although impressive, these statistics do not fully capture the effect of border closures on international tourism, as they include expenditures related to education and health care.

Obviously, the decline in imports was smaller than the decline in exports, which is to be expected since foreigners could not enter Canada, whereas Canadians could. The deficit fell from $18.1 billion to $9.3 billion—so there was still a deficit, but it was half the size.

If Canada had an overall surplus in 2020, it is thanks to students ($12.1 billion surplus): more foreign students come to study in Canada than the opposite. And the numbers remained relatively stable between 2019 and 2020, as did the surplus.

To summarize, for all types of personal travel combined, we have gone from a $6.2 billion deficit to a $2.6 billion surplus. That’s an additional $8.8 billion in the Canadian economy in 2020.

However, this windfall does not benefit just the Canadian tourism industry. It is unlikely that the entire $8.8 billion was spent on “local” tourism. Some of it probably went elsewhere, i.e., to other industries (people bought a swimming pool with the money set aside for their trip down south) or elsewhere geographically (local tourists went where they wanted to go, rather than where international tourists were lacking). On this point, it seems that Quebec tourists do not necessarily have the same preferences as foreign tourists (interest for the same places, for the same attractions, etc.). Montréal is a good example—it is popular among foreign tourists but shunned by Quebecers.

In short, it’s not money that’s lacking. There’s even more than before, but it’s not necessarily being spent in the same industries or in the same regions as it used to be—which is why we are observing significant regional disparities in the tourism sector recovery.