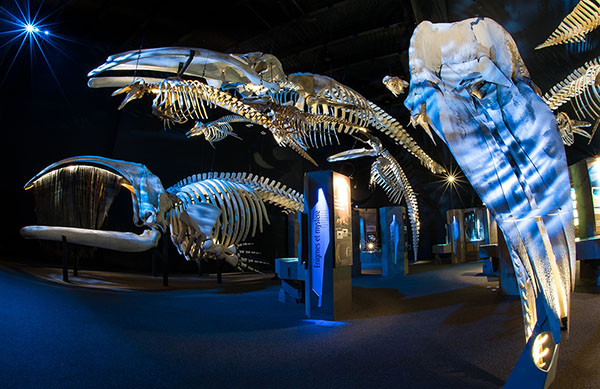 Major renovation project at the CIMM in Tadoussac

In the midst of the COVID-19 pandemic, the GREMM expanded and modernized its museum exhibit, which now houses the largest collection of whale skeletons in North America.

Non-profit organization (NPO) GREMM celebrated its 36th anniversary in 2021. The mission of this NPO is to increase public awareness of marine mammals and the science around them to ensure their future in the St. Lawrence for future generations. This mission is being met in part through the CIMM, GREMM’s scientific museum showcasing and disseminating knowledge on marine mammals to increase our knowledge and understanding of them so they are better protected.

While the global COVID-19 pandemic drastically reduced activity in the tourism sector, GREMM celebrated the end of its most important development phase, the expansion and modernization of its exhibit and integration of three new giants into its collection, according it the status of having the largest collection of whale skeletons in North America.

“We have always believed that our best publicity is the experience visitors have. They become ambassadors, speaking about us far and wide. The beauty of whales resonates with people, and we benefit from the fact they are touched by this to raise their awareness about the fragility of their environment.“

This $1.5-million project enables a dream held by GREMM Co-founder and Director of Educational Programs Patrice Corbeil since 2008 to become a reality. That summer, an episode of toxic algae led to the deaths of several animals living in the St. Lawrence, including a finback whale specimen measuring 15 metres long and weighing approximately 40 tonnes. The GREMM team collected the bones in order to give them a new life and to be able to recount, through the skeleton, the threats looming over the ocean giants. With a lack of space—since a whale cannot be brought indoors so easily—the behemoth had to wait for over a decade before a space was carved out for it in the CIMM exhibit hall, in Tadoussac.

With up to 35,000 visitors a year, the CIMM could already boast about being a must-visit location for education and environmental awareness. But because Mr. Corbeil and his team always see the bigger picture, new plans were developed on the drawing board: The finback whale, a young humpback whale and a right whale—a species threatened with extinction—would be placed at the centre of the exhibit, which would also include a subfossil of a 10,700-year-old beluga in a glassed-in floor compartment. These additions would make the CIMM a world-class attraction.

There were many sizeable challenges to bring this ambitious project to term. Cleaning, assembling, and installing these whales would require thousands of hours of work and an extremely rare expertise in Quebec. To add to the obstacles, the GREMM team chose to place the humpback whale—measuring 9 metres long and weighing 7.4 tonnes—vertically, in feeding position, something never seen in exhibits elsewhere around the world.

Another significant challenge: Constructing a new section of the building in the midst of a global pandemic. The work done in 2020 was delayed considerably, pushing back the opening of the CIMM to August instead of the original proposal of May. Saved by support from both levels of government and by regional stakeholders, including for the purchase of sanitation equipment, the GREMM team also had to adapt and reinvent itself to pursue its educational mission.

The centre restructured its service offering, including by training more interpreter-guides for visitors, thereby adding a new dimension to the visitor experience, which was affected by COVID-19 restrictions. Time spent waiting outdoors became a source of fun thanks to activities led by naturalists, and the tour become more personalized since the few people allowed in had more time to be with the whale experts. Collective efforts, combined with an unprecedented craze among Quebecers to explore their regions, made it possible to reach a record number of approximately 40,000 visitors in 2021.

Dreams come true thanks to CED

GREMM’s success is due in large part to the passion of its team. On top of this comes the tireless work of its leaders, who succeed year after year in convincing partners and collaborators that scientific research on marine mammals, raising awareness of environmental issues and the economic impact on tourism are key not just for the Côte-Nord region but for society as a whole.

“CED is enabling us to turn our dreams of making cutting-edge and sometimes even risky projects a reality. Because CED trusts us and knows our ability to go beyond our limits, we can implement our most innovative projects.“

Ideas for the future abound in the minds of those behind the CIMM. In addition to developing virtual activities for school groups, a technological shift is also planned for the interpretation centre. An augmented-reality project is being developed to drive the experience with the collection of 14 skeletons forward, and the creation of a new immersive hall is also envisioned. This hall would make it possible to view live images filmed by a drone exploring the heart of the habitat of the St. Lawrence’s whales. With the success of its preceding projects confirmed, it is a sure bet that the CIMM will be able to rally its partners and reach the hearts of its visitors.

Mr. Corbeil is aware of how difficult it is to measure, through performance indicators, the benefits of educational actions. But he observes today how a visit to the CIMM, which has existed for decades now, has been able to impact a new generation today at work in the field. Several young team members attest to the fact that they joined GREMM’s ranks after encountering naturalists, and after a memorable encounter with whales within the Saguenay-St. Lawrence Marine Park

“After over 35 years, we see the impact we can have on people. Hearing new naturalists recount how they were motivated in the past by our actions to raise awareness gives us the drive to move forward! In fact, we expect to increase our presence among young people; their desire to do things differently, to change the world for the better, the passion they have to take action for a healthier planet are essential for the future!”