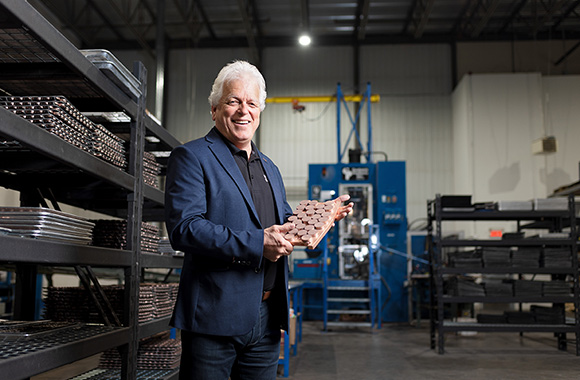 Kuma Brakes: A company with the wind in its sails

Christian Babin came up with the idea of starting a business that would specialize in the production of wind turbine brake pads when teaching students how to maintain turbine equipment. His expertise was instrumental in designing the concept and he spent more than 10 years developing his product before opening a manufacturing plant in Gaspé in 2015.

During these start-up years, efforts were focussed on trying to find the optimal formula for friction materials, with help from industrial materials specialists in Berlin and Detroit, as well as experts with the National Research Council of Canada (NRC) and Université Laval.

Research and development allowed Kuma Brakes to develop an innovative procedure using metal powders fused together under high temperatures and to be accredited as an official supplier for General Electric (GE)--the largest wind turbine manufacturer on the market.

CED support came at the right time—between the plant’s opening in 2015 and the product’s certification by GE, which took 18 months. “CED was a key partner from day one and believed in our project long before we became profitable,” recalls Christian Babin. “CED renewed its support each time we reached a milestone—from the R&D stage right up until our first contracts were signed following a tendering process and then for developing international marketing strategies.”

Kuma Brakes is still growing and is now supported by new partners to continue on its trajectory. Fondaction, the investment fund administered by the Confédération des syndicats nationaux (CSN), came in this year, investing more than $1 million so that this growing company could pursue new projects.

“ My goal is to show that a Gaspé-based company is capable of developing and exporting world-class, technologically innovative products.”

Kuma Brakes is unique in the Gaspésie region. Given that the local economy is traditionally driven by the development and export of natural resources, Christian Babin changed everything by focussing heavily on regional innovation. The plant is almost fully automated, employing only a dozen mechanical and industrial materials engineers. Kuma Brakes is therefore able to deal with the labour shortage and operate 24 hours a day. “Fortunately, we can double production during evenings without having anyone on site,” says Christian Babin.

While research and development work is now done largely in collaboration with the NRC in Boucherville, Kuma Brakes is strategically positioned in the region. Industrial parks have increasingly become deserted following the closure of wood processing and pulp and paper plants as well as the Gaspé mine. Christian Babin therefore saw an opportunity to play a role in developing a new sector in the region starting in the early 2000s. Kuma Brakes is now located near the Gaspé operations of LM Wind Power—an industry giant that produces wind turbine blades--and the port of Gaspé, which was recently expanded to store 107-metre-long blades and then ship them to destinations across the globe.

Looking towards Europe and Asia

Given that the expansion of the North American wind power market is being hampered by continued heavy reliance on fossil fuels, Kuma Brakes has set its sights on Europe and Asia to continue its growth trajectory, in addition to offshore wind power projects. Demand for offshore wind turbines is growing and governments have high hopes for offshore projects.

Offshore wind turbines are subject to strong and constant winds. They are much larger and deliver 4 to 5 times more power than land-based turbines. They are also much harder to maintain given their location.

With this new market, Kuma Brakes is now required to develop more durable and resistant brakes—something that the company is doing in collaboration with its regional and international partners. Its participation in international trade shows is also instrumental in recruiting new clients. After travelling to Salt Lake City in early 2022 and to San Antonio in May, Christian Babin took part in the Rendez-vous de l’innovation de l’Est-du-Québec on June 14th and will be attending the wind power conference to be held in Hamburg this coming September. Considering that he started Kuma Brakes as a retirement project, 2022 will be a very busy year indeed!

In future, Christian Babin expects that Kuma Brakes will be able to develop products for new industries, such as industrial brake pads for cranes and rail cars. However, the primary goal should be to ensure continuity in the region. It is safe to say that CED will be there to support Kuma Brakes in meeting these new challenges!